On March 13, 1986, Cambrell Jamaal Poitier was born to Arnette Marie Poitier-Stevenson (deceased) on the island of New Providence, Bahamas. He was the first grandchild for his grandmother, Franceta Poitier (deceased). As the matriarch of the family, she took him under her wing and determined to raise him in the way of the Lord. From a young age, Cambrell showed great promise in musical and oratory abilities. He quickly learned to play instruments in church. His mother kept him involved in many activities, particularly boys brigade, where he won poetry, spelling bees, and speech competitions regularly. He received his formal education from A.F. Adderley Junior High School and C.R. Walker Senior High School, and completed his studies as Deputy Head boy at C.R. Walker. At the age of 14, Cambrell attended a Sunday morning service at St. Jude’s Ministries in Nassau, Bahamas where he accepted Jesus Christ as his personal savior. Since that day, he became active in evangelism, ministry trips, street meetings, and dedicated his life to preaching the gospel. By the age of 17, Cambrell was able to play 20+ instruments and was identified by his high school music teacher as a “musical prodigy.” During his B.G.C.S.E. examination for Music, he performed superbly scoring a grade of 100% in practical and theory, which he was awarded for. He has served in ministerial and musical capacities for several churches in The Bahamas. He has been instrumental in conducting and participating in numerous musical workshops, choir concerts, musical seminars, worship team training, musician workshops, gospel projects and recordings over the years. He is highly regarded and respected in the gospel music community.

Presently, Cambrell serves as the Minister of Music at Kingdom Worship Centre International where he directs the band and praise team. Occasionally, he assists Bishop Kermit Saunders in the preaching of the word and encouraging the believers upon request. Cambrell works as an announcer at Dove 103.7 FM under the alias “Minister C.” He is known for his emphatic tag line “wake up, wake up, wake up.” He has truly found one of his life’s greatest passions in being an on air personality with a Christ-based focus. Cambrell is married to his beautiful and caring wife, Yasmin Ann Poitier. He is the proud father of two sons, Cambrell Poitier Jr. and Canaan Poitier.

Favorite Scripture – Many are the afflictions of the righteous: but the LORD delivereth him out of them all. – Psalm 34:19

Why do I love what I do at Dove? –  I get to inspire, motivate and encourage an entire populace on a daily basis. I believe I have been placed in this unique position because God trust me to serve his people and feed His sheep. Ultimately I get to make sure that the name of Jesus is lifted up every day. This is the best job on earth for someone like me 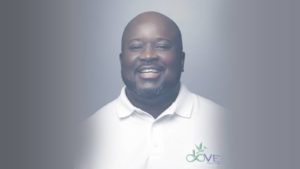